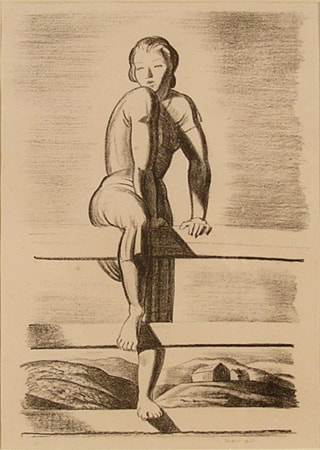 edition of 100 plus 10 artists proofs

Two hundred proofs printed, one hundred for the artist and one hundred on larger sheets for the frontispiece of Waldo Peirce's "Unser Kent" (1928, 1930). Two drawings, one in pencil and the other in pen-and-ink and pencil, are in the Kent Collection at Columbia University Library. The plate was destroyed.

Rockwell Kent was born and raised in Tarrytown, New York. He exhibited an early aptitude for art that was encouraged by his mother's sister who was an amateur artist. At the age of thirteen, Kent's aunt took the young boy on a tour of Europe, during which he was able to experience much important art and architecture first hand.

A few years later, Kent studied at William Merritt Chase's summer art school in Shinnecock Hills, Long Island, and was offered a full scholarship. However, Kent's mother, less than happy about the idea of her son studying art in New York City among a group of bohemians, convinced the young man to accept a four-year scholarship to the School of Architecture at Columbia University. Kent studied at Columbia for three and one-half years before deciding that the fine arts were his true calling, finally accepting the scholarship to the Chase School. Kent went on to develop a highly successful career as not only a painter, printmaker, illustrator, and designer, but also as a writer, political activist, and spokes person for artist's causes. Although Kent was clearly recognized as a formidable artistic talent, his political ideas and activities eventually overshadowed his other achievements.

In the mid-nineteen thirties, he was one of the best known of contemporary American painters, and then he virtually disappeared from most American art surveys until the 1960s when he again received serious critical attention.