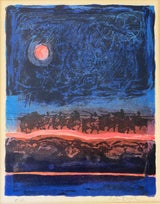 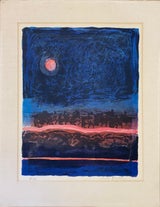 Nissan Engel was born in Israel in 1931. Studying art and graduating from the Beaux-Arts Bezalel in Jerusalem, he went on the study theatre design at the Centre Dramatique de l'Est in Strasbourg, France. He stayed in France, moving to Pairs, where he continued painting and printmaking. He first exhibited at the Gallerie Weil in 1960. In 1965, Engel moved to New York City and met the Abstract Expressionist, which heavily influenced his mixed-media work. He was a prolific printer and painter, mixing mediums as he saw fit; constantly pushing boundaries and creating colorful collages. He passed away in 2016, leaving behind a legacy of harmonious, abstract paintings and mystical collaged prints.