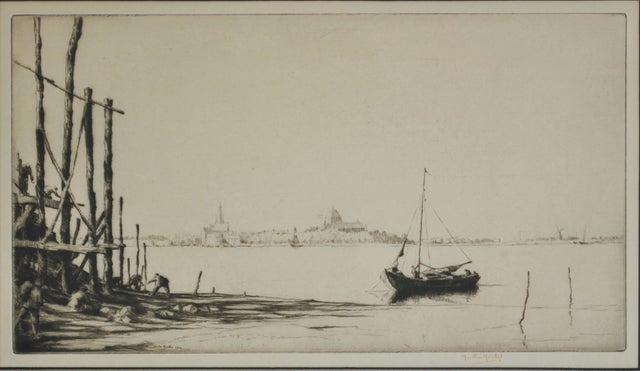 Martin Hardie was born in London, 1875 to parents with strong artists connections. Growing up practicing art, he studied at Cambridge University reading classics. After graduating, he acquired a position in the Department of Engraving, Illustration and Design at the Victoria & Albert Museum in London. He gained a newfound taste for printmaking and was able to take classes on the Museum Campus with notable printmaker Frank Short at the Royal College of Art in London. Short's subject matter of land or coastal scenes with low horizons rubbed off on Hardie and many of his etchings followed that subject. He was named Keeper of Prints and Drawings at the Victoria and Albert Museum, and he became well known for his writings on art, specifically etchings. His watercolors and etchings are still in some London Galleries.