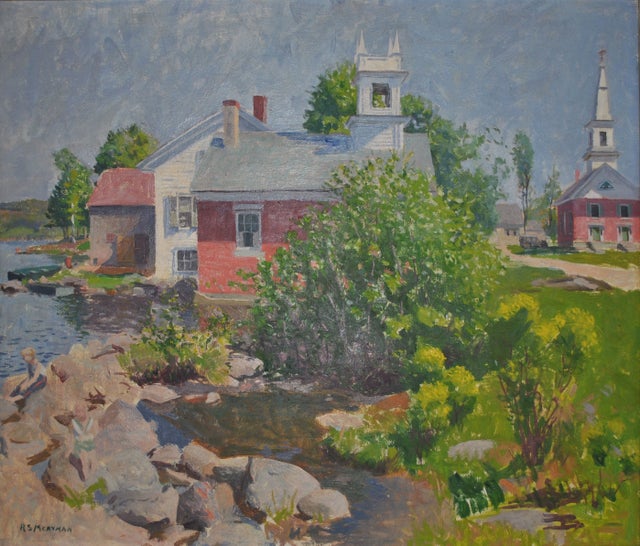 Artist Richard S. Meryman, an American Impressionist, went by nickname "Wig" during his lifetime. He was born in Chelsea, Massachusetts and studied at the Museum School in Boston. His grandfather was a captain and owner of clipper ships that sailed to the East Indies out of Harpswell, Maine.

Meryman went on to study under Abbott Thayer in Dublin, NH. Following his studies under Thayer, he joined the WWI Ambulance Corps. His commanding officer reminisced, "There was a painter from Boston named Meryman, perfectly harmless as a soldier, but full of wit, philosophy, and mental activity."

'Wig' returned from the war and became the director of art at the Corcoran Gallery of Art in Washington, DC. He painted portraits of dignitaries including the secretary of the Navy, a chief justice of the Supreme Court, and President Coolidge's deceased son.

By 1935, Meryman's traditional 19th century realism became eclipsed by modernism. He mutually parted ways with the Corcoran Gallery of Art. The artist bitterly blamed art dealers for promoting abstract art and refused to "play the game" of the art establishment.

Meryman returned to Dublin, NH and sold landscapes out of his studio. "Until his death in 1963, he was a personage, a raconteur with the gift of instant kinship."

"A gentleness of spirit and a major twinkle in his eye and a quiet wit. He had the capacity to be amused by the follies of the human condition. And he was not overly impressed by important people." He painted out of love of painting, love of landscape, or a person that moved him.