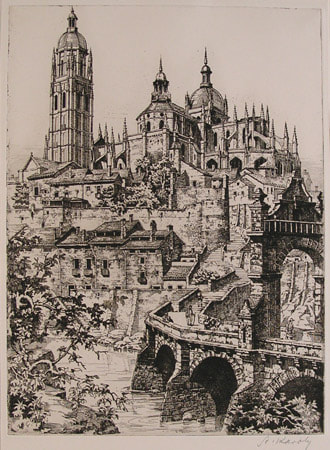 A Hungarian born painter and etcher of figure studies, landscape and city views, Andrew Karoly studied art in Budapest before the outbreak of World War One. After the War ended in 1918 he began to produce paintings and etchings of scenes in Italy, Germany and particularly, France. He came to live in New York around 1920 and during the years of the Great Depression (1930 - 1939), Karoly worked on a number of art projects commissioned by the Works Progress Administration (W.P.A.), including several large, public murals in collaboration with another Hungarian born artist, Louis Szanto. They completed a mural in Poughkeepsie, New York, at the Poughkeepsie Journal entitled "Freedom of Speech," depicting the history of American journalism. At the Shaker Heights, Ohio, Public Library, they focused on scenes from Alice in Wonderland. After World War II, Karoly and Szanto dominated mural painting in the Cleveland area, completing over 30 murals for local businesses. In New York City, Bellevue Hospital has a mural by both artists in the Children's Ward.