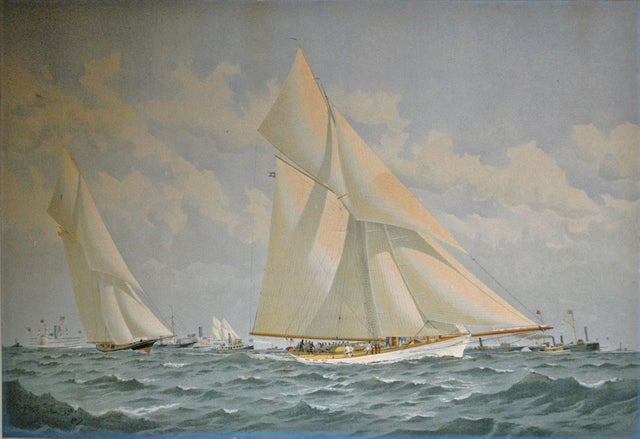 Fred S Cozzens (1846 - 1928) was an American Marine artist, known most notably for his works of yachts. Mostly self taught, Cuzzens attended the Rensselaer Polytechnic Institute from 1864 - '67, but did not obtain his degree. He spent much of his time painting marine watercolors, which became so popular in the 1880's that he learned new mediums for mass production, including chromolithography, which allowed for color printing instead of hand-coloring using watercolor. A book of his works was first published in 1884, "American Yachts: Their Clubs and Races", which included 26 reproduced watercolor prints. This was the first in a series of four published books, and Cuzzens continued painting on his own time until around 1918. This lithograph was created by Armstrong & Co. in Boston and published by C. L. Jones & Co.