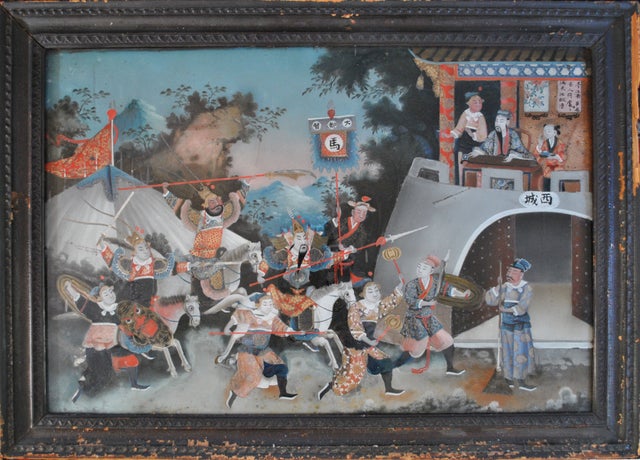 This exceptional piece is painted on a sheet of glass, giving the illusion of depth through the layers of paint. Delicately painted soldiers advance in the streets towards the village gates, carrying flags, weapons, and large shields, either on horseback or on foot. In the top right corner, sits a lord over his village, the gates open. He plays a stringed instrument and passively looks on to the display of force. A lone sweeper stands in the village gates, watching the approaching army. The artist painted in rich blues, reds, greens, and ornate gold, creating elaborate patterns for each soldier that expresses their rank or role. The painting sits in it's original carved wooden frame. The artist is unknown.

This is a rendition of a story from "Romance of the Three Kingdoms", a Chinese historical novel that romanticizes events from the late Han Dynasty and the Three Kingdoms period (169-280 AD). Depicted is a scene best known as the "Empty Fort Strategy". As the rallying forces grow outside the village gates, the defending leader and military strategist Zhuge Liang sits above with mere page boys to protect him, playing his 'guqin'. He watches the armies below with a calm exterior, while the gates to his village sit wide open to a seemingly empty village. Soldiers disguised as civilians are told to sweep the roads while the army advances. But the leader of the troops, Sima Yi, knew that Liang was an exceptional strategist and he withdrew his forces, fearing an ambush from inside the city. Thus, Zhuge Liang kept his village safe with a simple bluff. Although it is mentioned that he noted this defense only worked because he knew his opponent would over-think the assault, this strategist became well known for out-witting many adversaries.