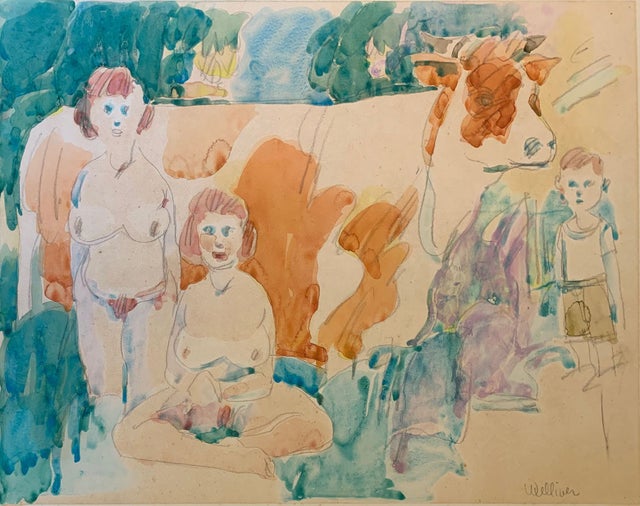 Neil Welliver was born in then-rural Millville, Pennsylvania in 1929, and he spent most of his adolescence in the area, attending the Philadelphia College of Art in 1953 and earning himself a BFA. He spent the next two years obtaining a MFA at Yale, where he studied abstract painting and color theory under Josef Albers. He graduated and continued at Yale as a teacher for 10 years, and then moved to the University of Pennsylvania Graduate School of Fine Art where he taught from 1966-1989.

After his retirement, he commuted monthly to Philadelphia from his farm in Lincolnville, Maine, where he became part of a circle of renowned mid-coast Maine realist painters, including Alex Katz, Yvonne Jacquette, and Rackstraw Downes, to name a few.

In the 70's, Welliver underwent a series of terrible events: losing his best friend, his farm house and his entire art collection, his infant daughter, his wife, and finally, his son. While these events didn't show in his work in terms of subject matter, Welliver noticeably eliminated the human figure from his paintings during this time, which marked the transition to his mature works. After losing his son, he spent time in Allagash, Maine, where he studied and painted the remnants of an awful forest fire. For Welliver, it seemed to be his way of processing his loss.

Welliver is known most for his realistic Maine landscapes, highly regarded as some of the most important landscape paintings of his time. His background of abstraction allows for a flexibility in the natural that many other landscape painters just didn't have. He has permanent collections in museums such as the Metropolitan Museum, the Museum of Modern Art, and the Whitney Museum and has also been the subject of more than seventy one-person exhibitions.