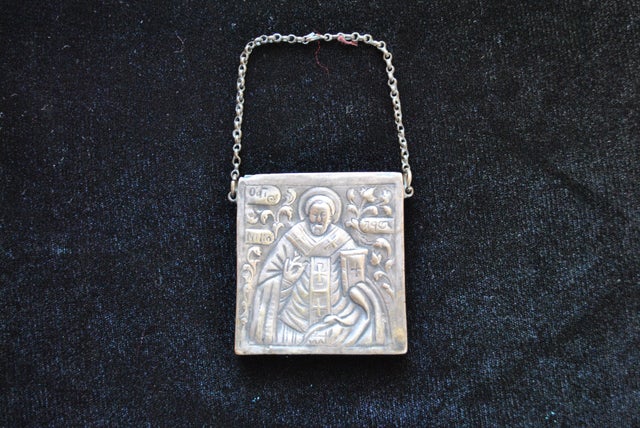 A charming icon of Saint Nicolas, this small piece was crafted as a carrying case, with an opening at the top and a thin chain for attaching to clothing. Indicated on the icon itself is St. Nicholas in holy garments, making a blessing gesture in his right hand and holding the Bible in his left. There are some decorative floral carvings surrounding him, as well as his title.

On the back is an engraved equal-armed cross.

Saint Nicolas is a popular saint, and is the patron of a variety of classes and professions, including; sailors, merchants, repentant thieves, children, pawnbrokers, unmarried people, and students in various cities and countries around Europe. He was a pious saint, and his legendary affection of secret gift-giving evolved into the myth of "Saint Nick" (Santa Claus).