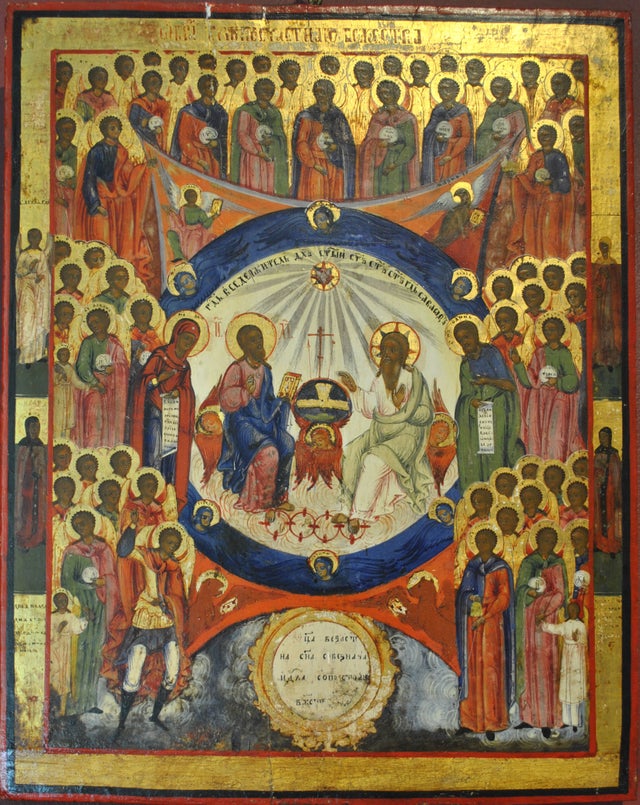 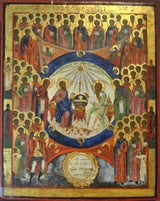 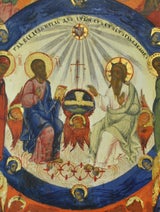 This Russian icon indicates the Trinity of the New Testament. The Trinity, known generally as the Father, Son, and Holy Spirit, is a theme among many icons during this time, sometimes known as the Paternity icon. In this reiteration, Christ is portrayed as a grown man dressed in robes of red and blue, holding a bible and making a blessing gesture. Mirroring him is the Father, an aged man with a long beard dressed in white and pale green, also making a general blessing gesture. Above them both is a small indication of the Holy Spirit, taking the form of a white dove surrounded by a gold halo - a popular motif of this century. The gold leafing is used to signify the holiness of the subject as well as bringing light into the piece. Among the trinity are a triplet of angels, their wings red around their halos, which may be depicting the three angels sent to Abraham. Surrounding the central composition are groups of saints and angels, all illustrated with halos and dressed in complementing red, orange, blue, and/or green robes. The chorus of saints stand in awe viewing the scene of the Holy Trinity, some holding scrolls towards the central figures, some holding globes that seem to signify names or symbols, and some making comments to each other - yet they all still hold their attention to the central scene.

Interestingly enough, many sects of Christianity forbade the icons to include imagery of God the Father, nor to include a dove representing the Holy Spirit. While there are records that Christ was of the flesh, many churches instilled the idea that since the Father and the Holy Spirit were not of flesh, then we may not allude to know to what forms these holy beings may take.