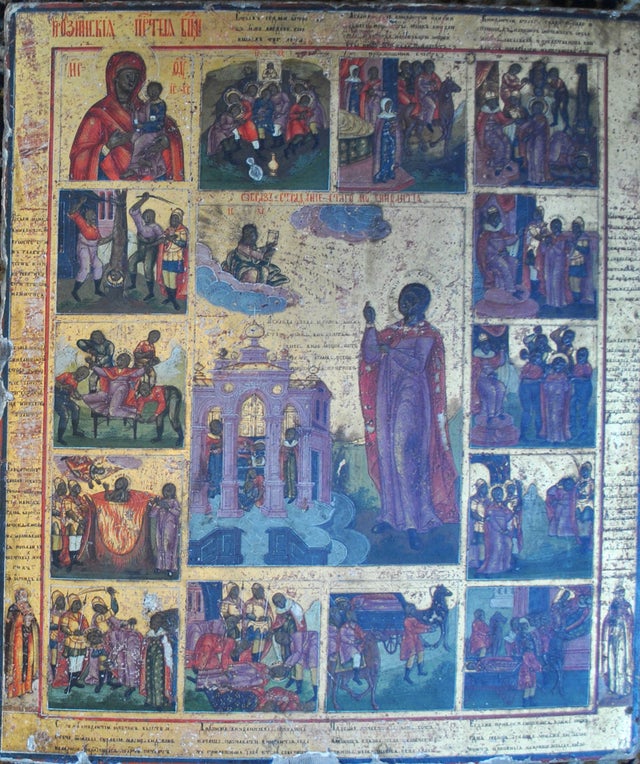 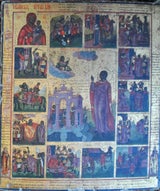 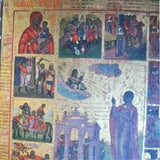 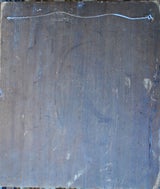 This gilded icon celebrates the date of August 4th, in the 17th new calendar year. Illustrated in this piece is the Martyrdom and life of Vnifantii. The central frame is a depiction of the Martyr Vnifantii receiving a holy message from God. In the top left corner is a portrayal of the Madonna and Child. Surrounding the internal image are various vignettes portraying the life and death of Vnifantii; including various torturing methods used on the Martyr: scourging, the pulling of finger and toe nails, boiling the Martyr alive, and finally decapitation. Following these images of torture (continuing counterclockwise) are vignettes representing the funeral procession.

Holy Martyr Vnifantii (also recognized as Vnifantius, and Boniface of Rome) led a dissolute life but was merciful, generous, and peaceful. Eventually married to his superior, a boyar named Aglaida, both lived as loving followers of Christianity. During the prosecution of Christians, Aglaida sent Vnifantii to the Middle East to collect relics of martyrs in order to preserve their history. He arrived in Cilician city of Tarsus and during one night, came upon Christians being tortured for their faith. He stood in disobedience and kissed the shackles on their wrists. For this, he was tortured relentlessly, as is indicated in the icon vignettes. During his decapitation, milk flowed freely from his neck and the miracle swayed many a pagan to turn to Christ. His body was later recovered by his wife, Aglaida, who collected the relics and buried his body in honor, as a martyr.

Included in the top segment of vignettes, to the right of the Madonna and Child, is a vignette depicting the Seven Youths of Ephesus. Maximilian, Iamblichus, Martinian, John, Dionysius, Constantine, and Antonius were young men in the third century during the persecution of Christians. The seven youths confessed their faith before the Emperor Decius, but were let free due to their noble heritages. Unfortunately, this kindness was short lived, and Decius decided they were to be captured or killed. The youths fled to a nearby cave, where they prepared for martyrdom. The Emperor ordered the cave be walled up to starve the young men, but an act of God put the youths into a two-thousand-year sleep. Two centuries later, the wall was cleared away by the new owners of the land and the seven young men were awaken and freed. One of the youths was stopped in town when attempting to use two-century-old coins to purchase food. The new Emperor Theodosius, being a man of God, recognized the touch of the Lord and went to speak to the seven young men in the cave. The young men recounted their story and then, in front of a congregation of people, fell back into a deep sleep until the General Resurrection.