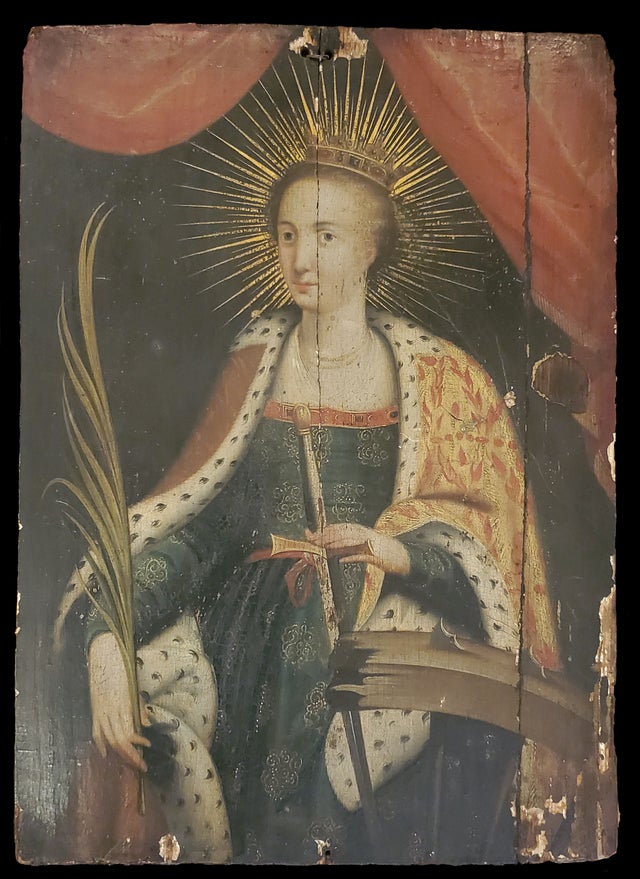 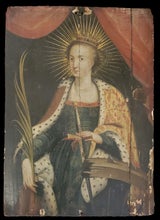 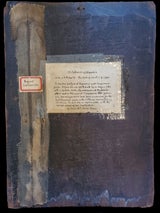 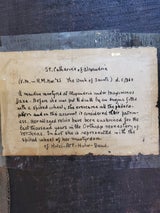 Some chipping of the wood on the edges is visible, some cracking in the grooves where the four smaller panels of wood meet. The surface has minimal dust and dirt accumulation, but some paint has come off in areas close to the wire at the top and to the right of the figure's left shoulder and elbow.

A maiden martyred at Alexandria under Maximinus Daza. Before she was put to death, by an ____ (?) fitted with a spiked wheel, she overcame all the philosophers and on this account is considered their patroness. Her alleged relics have been enshrined for the last thousand years in the Orthodox monestery of Mt. Sinae. In art she is represented with the spiked wheel of her martyrdom.

More on Saint Catharine of Alexandria

There are no primary sources to attest to Saint Catharine's existence. Stories of her are handed down through tradition by the Orthodox and Catholic Church. Saint Catharine is the Great Martyr of the Orthodox church. The Roman Catholic church venerate her as one of the great virgin saints of the early church.

She was born around 287 in Alexandria, Egypt. She was likely of noble birth and is described as a educated and avid scholar. As a teenager, the emperor Maxentius began persecuting Christians and she visited him to denounce his cruelty. The emperor brought 50 philosophers in to debate her, before deciding upon execution. She spoke eloquently in defense of her faith, and some of the philosophers immediately converted to Christianity. Those that converted were executed. She was then imprisoned and scourged. She was then given one final chance to save herself by marrying Maxentius. Catharine rejected the offer and the emperor angrily ordered her execution on the breaking wheel (frequently seen depicted with her in paintings, including this retablo). Catharine approached the wheel and touched it, causing a miracle that shattered the wheel. With the wheel broken, the emperor ordered her beheaded.

A monestary was named after Saint Catharine by Emperior Justinian three hundred years later. It is the oldest monastery in the world. Her patronage includes many professions and causes, including students, unmarried girls, and apologists.

A Brief History on Retablos

Retablos are devotional paintings derived from iconography used in art of the Catholic Church. The term "retablo" from Latin etymology meaning "board behind." The word in Spanish, a slight variation as "retable" describes a sculpture or painting placed above an altar. Some smaller retablos are painted on a sheet of tin illustrating representations of Christ, the Virgin Mary, and other Catholic saints. These paintings were popular during the Renaissance and Late Middle Ages in Spain.

When the paintings became popular in Latin America by the 18th century, they were primary created to express gratitude toward the Virgin Mary or other saint for saving a person or loved one from a dangerous or nearly fatal incident.