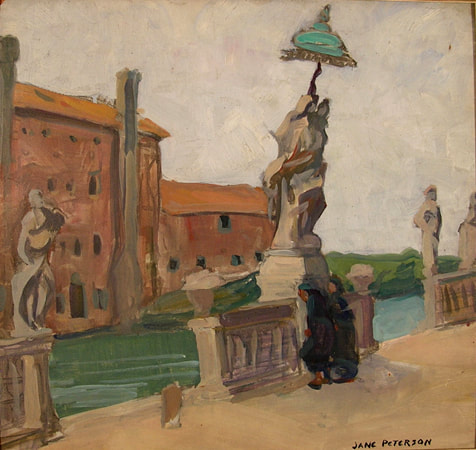 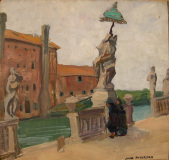 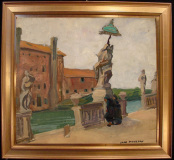 Born Jennie Christine in Elgin, Illinois, she officially changed her name to Jane Peterson in 1909 after her first success as an artist. Her family was of humble background, but certainly not poverty stricken. She became famous for a wide range of works from landscapes to still-lifes that blend Impressionist and Expressionist movements. As a woman, her life was much more independent and adventurous than those of most of her contemporaries, and she traveled widely to paint, including joining Louis Comfort Tiffany on a continental painting expedition in his private railway car.

Peterson does not belong to any particular school of painting, but combined techniques and styles from a variety of teachers and prevalent styles. However, many of her early works were strongly Impressionist, much influenced by Joaquin Sorrola y Bastida, a Madrid painter under whose teaching she abandoned dark tonalities for the spontaneous methods of applying paint characteristic of Impressionism.

At age 18, with a gift from her mother of $300 (then a substantial sum of money), Peterson enrolled in the Pratt Institute in New York City and studied with Arthur Wesley Dow, graduating in 1901. She also studied at the Art Students' League with Frank DuMond and held several teaching positions that took her to Boston and Maryland. Subsequently she studied in Paris and lived around the corner from Gertrude and Leo Stein, who invited Peterson to many of their soirees where she met leading intellectuals including Picasso and Matisse.

She studied in Venice and in London with Frank Brangwyn and in Madrid with Joaquin Sorolla, whom she accompanied in 1919 to the United States when he received a commission from Tiffany to paint his portrait. Tiffany's home at Laurelton Hall, Oyster Bay, New York had lavish gardens that reminded visitors of Claude Monet's gardens at Giverny. Peterson did paintings of this garden that strongly resembled work by Monet's followers at Giverny.

In 1916, she exhibited work she had painted in the Pacific Northwest while traveling with Louis Tiffany. By 1916, she was also doing much painting of colorful beach scenes with Maurice Prendergast and went on to paint many landscapes and seascapes. She completed many floral subjects, which were inspired by the gardens of her summer house in Ipswich, Massachusetts. Many of her beach and pier scenes were from painting trips to artist colonies along the Massachusetts coast.

Her first successful American exhibition was in 1909 at the St. Botolph Club in Boston, and from that time her work was the subject of over 50 one-person shows. In 1925, she married Moritz Bernard Philip, a lawyer and art patron.