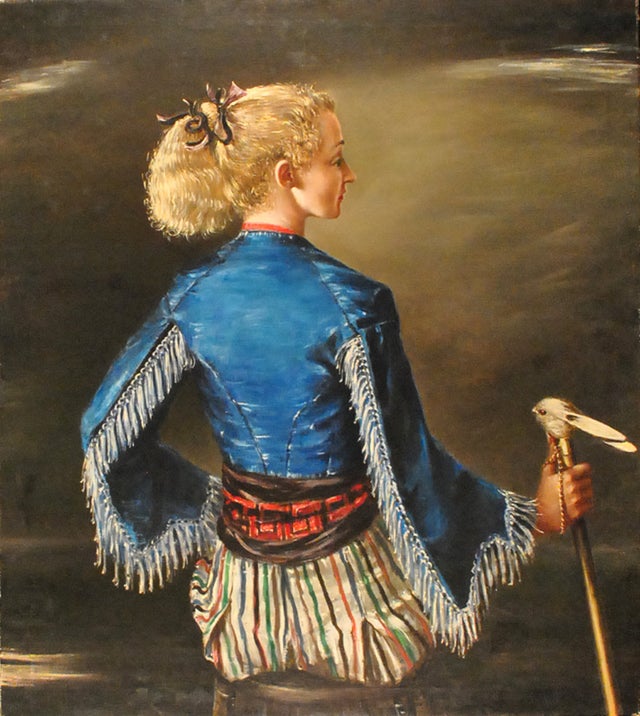 Framed with a gold frame (included in price)

Though both artists were members of OAA and respected and successfu painters i n their own right they were identified more with the summer society life than its art colony artists and locak residents. The two men were synonmyous glamour , flamboyance, and chic. Hare's clients incluede such noted Palm Beach and New York socalites as Phyllis Rhinelander and Alexander Woolcutt, comedienne Beatrice Lily,actress Floraece Nash and authors Booth Tarkington and Kennith Roberts.

"Channing Hare has found the means of revelatiom, refusing to paint only the features of his model and insisting on portraying a person rather than a physique. By using a reflection in mirrors 0f tarnished silver and patined gold the artist has, to a full length of genuine qualty added the revelation of a preceptive study of the reflective figure, head averted,an eloquent tribute to reticence, a reminder of a riddle of persoality a revelationof the inscrutable"

But more than a portrait Hare was a Magical realist. The term 'Magical Realist was coined by German art critic Fanz Roh in an essay written in 1924. Roh initially referred to this art as Post expressionism he added Magic Realism as a byname. he spoke ofa "renewed delight in real objects", and added ,that this new art seemed to ffer "a calm admiration of the Magic of being; a question of representing before our eyes, , in an intuitive way, the fact the interior figure, of the exterior world."

Frome a Palm Beach paper in 1952: "Channing Hare has the ability to express the human mystery by revealing worlds of personality by unusual angles of vis, notably by painting figures where the face is turned away from the audience, the eyes not hidden but ratherwithheld from viewwhile the individuality is found expressed in a gesture of the shoulder, a curve of the back an arabesque of the neck."