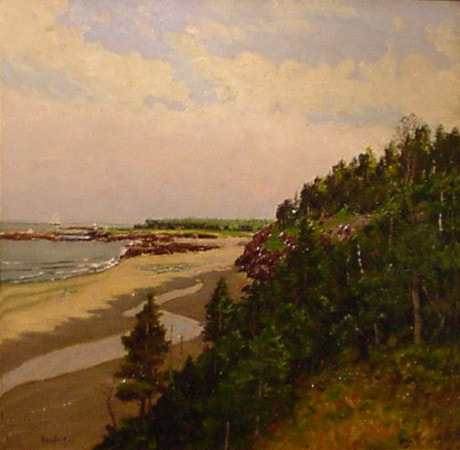 Framed in a gold leaf frame (included in price)

Benjamin Foster's specialties were the poetic scenes of the New England countryside. He was also an art critic. In style, he is associated with a group of landscape painters who were known for their use of limited tones and subdued color--almost exclusively autumn colors, muted browns, grays and rusts. He also used many of the painting techniques of the impressionists. It is thought he completed most of his paintings in his studio and not on location, "en plein air."

Foster was born in Maine and for financial reasons, did not begin an art career until he was almost age thirty. After an early profession in business, he attended the Art Students League in New York City, studying under Abbott Thayer. In 1886, like many American artists, he went to Paris where he studied with Aime Morot and Luc Oliver Merson. But he was homesick for New England and returned to America after one year, settling in Cornwall Hollow, Connecticut. Most of his landscape painting was of that area. He died in New York City.