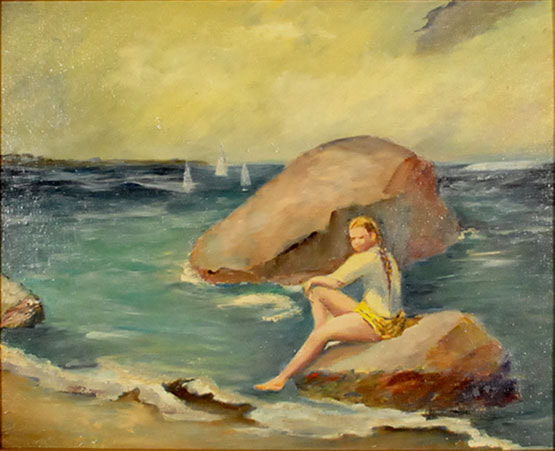 Signed, titled and dated '39 on back

Most of his work depicts scenes in Maine and he was later influenced by Cezanne. Around 1918, he began painting the birds of Mt. Desert Island and a portfolio of them was published in 1934-35. His works were exhibited at the Durand-Ruel (1927), Wildenstein Gallery (1936, 1946) and the Pennsylvannia Academy (1947). In 1944, The National Academy of Design awarded him the Carnegie Prize for the most meritorious painting by an American for the "Somes Sound", a Maine scene.

A cousin to John Singer Sargent, Carroll Sargent Tyson, Jr. was born in Philadelphia and studied at the Pennsylvania Academy of Fine Arts from 1856 until 1899 under Anshutz, Chase and Beaux. Later, he went to Paris where he collected impressionist paintings. He then studied at the Royal Academy with Karl Marr and Walter Thor. After this period, he went to Madrid, where he copied in art galleries. In 1912, while painting the portrait of Helen Roebling, who was the granddaughter of the builder of the Brooklyn Bridge, he fell in love and married her. They lived in Philadlephia until 1924. During World War I, Tyson designed government stamps and recruiting posters and worked on ship camouflage at the Philadelphia Navy yard.

Tyson was friends with Mary Cassatt and Claude Monet; and in Philadelphia, with Henry McCarter and Adolph Borie.