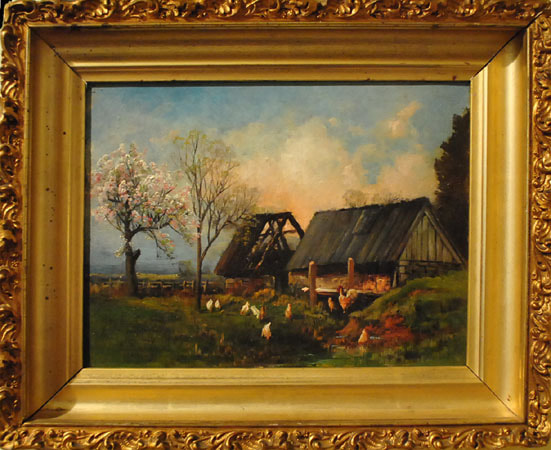 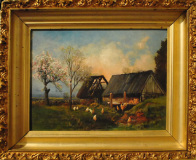 Landscape painter Carl Philipp Weber was born in Darmstadt, Germany. His parents were the musician Carl Weber and his wife, Eleanore Weber. Carl Weber is believed to be the older brother of the Romantic landscape painter Paul Weber who worked in Philadelphia from 1849-1860.

The strict, refined style which characterizes Carl Weber's landscapes can be attributed to his uncle, also named Paul Weber (1823-1916), who was the renowned German landscape painter under whom he studied in Darmstadt and Munich. Paul Weber was also the teacher of famous landscape artists Thomas Moran and Edward Lewis. Carl P.Weber continued his training under sculptor and muralist August von Kreling in Nuremberg.

Although his artistic training occurred in Germany, Carl Philipp was raised primarily in the United States after he emigrated in 1853 to Germantown with his parents, musician Carl Weber and his wife Eleanore Bonnet Weber.

At the age of 30, Carl Philipp opened his own studio in Philadelphia, and demonstrated his profound admiration of nature by focusing exclusively on landscapes in the German Romantic tradition. In Philadelphia, he was said to have "few equals and no superiors" in the field of watercolor painting. Many of his works suggest that he painted his large canvases from sketches both produced in the field and from his imagination.

Weber's early work shows the influence of mid-19th century Romanticism, and his compositions are usually delineated by the use of tonal painting, juxtaposing contrasting sections of light and dark. Often, one area or object is highlighted, and appears almost divinely illuminated, one of the key concepts portrayed by the 19th century landscape painters, the pantheistic idea of worshipping God through nature. For these painters, art became a form of Divine worship, in which the artists are the Priests who "preached" to the viewer silently, visually, through their paintings.

Weber's talent as a landscape painter gained him popularity and fame, which was documented in a Philadelphia newspaper clipping from 1895:

"C. Philipp Weber, Artist No. 1334 Chestnut St). . . Fifteen years ago he opened a studio on Chestnut Street, and he has since achieved national reputation, standing today in the front ranks of our most accomplished American artists. He has several pictures in the [Pennsylvania] Academy of Fine Arts, and many beautiful specimen of his genius and talent adorn the mansions of our most refined and wealthy families . . . the most expert critics have pronounced his work perfect, and among his brother artists his productions are highly spoken of . . . "

Carl Philipp Weber's paintings were exhibited at the Pennsylvania Academy of Fine Arts from 1876-1891 and at the National Academy of Design in New York in 1880 and 1881. He was a member of the Philadelphia Artists Fund Society.