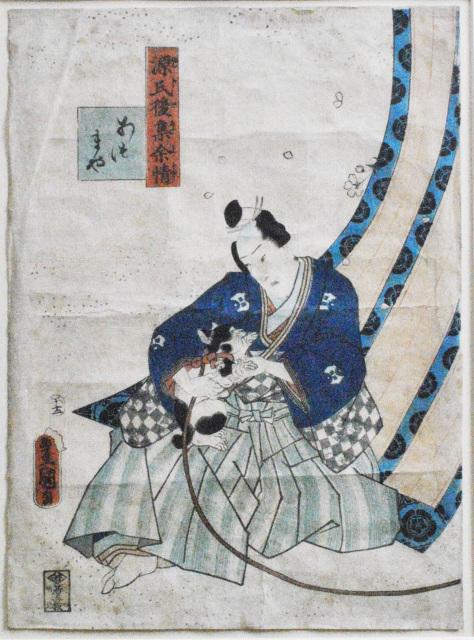 Ukiyo-e prints are Japanese woodblock prints and their name translates directly to "pictures of the floating world." Most woodblock prints were extremely accessible to a wide audience due to their low cost. During the Edo Period, most prints were valued at about the same price as a bowl of rice.

Ukiyo-e "pictures of the floating world", is a genre of Japanese woodblock prints produced between the 17th and the 20th century, featuring motifs of landscapes, the theater and pleasure quarters.

Ukiyo, meaning "floating world", refers to the impetuous young culture that bloomed in the urban centers of Edo (modern-day Tokyo), Osaka, and Kyoto that were a world unto themselves. It is an ironic allusion to the homophone term "Sorrowful World", the earthly plane of death and rebirth from which Buddhists sought release.

The original Buddhist term had a solemn religious connotation, and referred to the ephemeral nature of human life. Not until the middle of the seventeenth century, when Asai Ryoi used the term for his book, Ukiyo Monogatari (Tales of the Floating World) did it come to describe a certain style of life. Ryoi aptly captured it's significance for the pleasure loving crowds of Edo by describing it as "living only for the moment, gazing at the moon, snow, cherry blossoms and autumn leaves, enjoying wine, women and song, drifting along with the current of life, like a gourd floating down a river". Though Ryoi surrounds ukiyowith charming implications, he also associates it with an image of aimlessness and empty-headedness, retaining some of the word's original Buddhist overtones. This slight note of criticism, mixed with an obvious sense of delight, formed an appropriate commentary on the profligate yet congenial lifestyle of Edo's rising merchant class. Oppressed by a Shogunate that severely curtailed any productive developement of their wealth, they had no alternative but to dissipate it on momentary diversions and amusing trifles.

The art form rose to great popularity in the metropolitan culture of Edo (Tokyo) during the second half of the 17th century, originating with the single-color works of Hishikawa Moronobu in the 1670s. At first, only India ink was used, then some prints were manually colored with a brush, but in the 18th century Suzuki Harunobu developed the technique of poly-chrome printing to produce nishiki-e.

Ukiyo-e were affordable because they could be mass-produced. They were meant for mainly townsmen, who were generally not wealthy enough to afford an original painting. The original subject of ukiyo-e was city life, in particular activities and scenes from the entertainment district. Many ukiyo-e prints by artists like Utamaro and Sharaku were in fact posters, advertising theater performances and brothels, or idol portraits of popular actors and beautiful tea-house girls. Beautiful courtesans, bulky sumo wrestlers and popular actors would be portrayed while engaged in appealing activities. Later on landscapes also became popular. Political subjects, and individuals above the lowest strata of society (courtesans, wrestlers and actors) were not sanctioned in these prints and very rarely appeared. Sex was not a sanctioned subject either, but continually appeared in ukiyo-e prints. Artists and publishers were sometimes punished for creating these sexually explicit shunga.