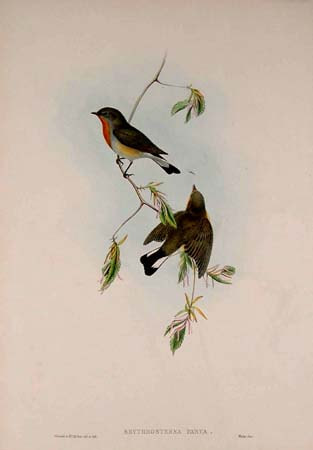 Gould learned taxidermy at Windsor Castle, where his father was foreman of gardeners. In 1827 he became taxidermist to the Zoological Society of London. The arrival in 1830 of a collection of exotic bird skins from the Himalayas enabled him to produce the first of many folio volumes, A Century of Birds from the Himalaya Mountains (1831-32). Gould's sketches were transferred to the lithographer's stone by his wife, the former Elizabeth Coxon, whose artistic talents were to enhance many of his works until her death in 1841. The five-volume Birds of Europe (1832-37) and Monograph of the Ramphastidae (Toucans) (1834) were so successful that the Goulds were able to spend two years (1838-40) in Australia, where they made a large collection of birds and mammals. The collection resulted in Gould's most famous work, The Birds of Australia, 7 vol. (1840-48; supplements 1851-69), and in Mammals of Australia, 3 vol. (1845-63). He was elected Fellow of the Royal Society in 1843.

"The Trochilidae of Gould is his masterpiece, and must ever remain a feast of beauty and a source of wonder and an incomparable catalogue and compendium of beauty." Fine Bird Books

Gould's lifetime work comprised more than 40 volumes, with more than 3,000 coloured plates. His many scientific papers, mostly devoted to descriptions of new species, established his professional reputation, but he is best known today for his folios.