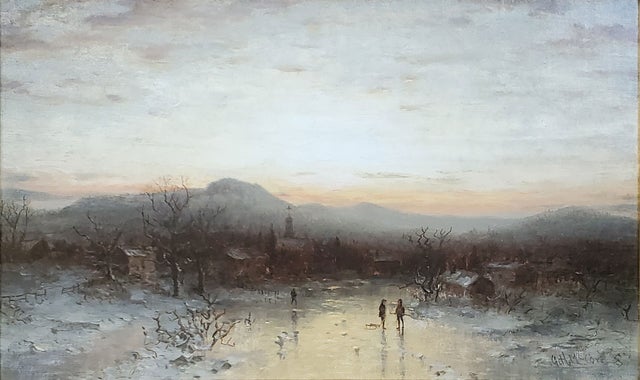 Signed lower right / with frame below

George McCord was a Hudson River School artists. Known for atmospheric marine and landscape paintings in oil, pastel, and watercolor and for black and white drawings, George McCord was born in Manhattan on August 1, 1848 and began his art studies in that city in his eighteenth year and remained primarily a resident in Brooklyn although he traveled widely and from 1883 also had a studio in Morristown, New Jersey. He was part of the second generation of Hudson River School painters.

He studied at the Hudson River Institute, the Claverack Academy in Claverack, New York and with Samuel Morse and James Fairman. By 1870, he was exhibiting at the National Academy of Design.

He made frequent sketching trips in New England, Canada, and the Upper Mississippi and participated in one of the exclusive excursions sponsored by the Santa Fe Railroad to paint the Grand Canyon. He was also part of a special Erie Canal painting trip, and was commissioned by Andrew Carnegie to paint the scenery around his castle in Cluny, Scotland. He visited Florida as early as 1874, when it was just becoming the mecca for great Eastern vacationers. He was a painter of landscapes and coastal views and plied a variety of mediums including oil, watercolor, pastel and pen and ink. He exhibited at the National Academy of Design for the first time in 1868, and was a frequent exhibitor thereafter. His pictures could also be seen at the exhibitions of the American Water Color Society and the Society of American Artists. That McCord's work was very well received is attested by the awards that it earned, including medals at the Mechanics Institute Fair in Boston in 1883 and the World's Cotton Exposition in New Orleans the following year. (4)

McCord was obsessed by the effects of light upon atmosphere, his subjects seeming at times to virtually dissolve into the light. In this, the artist undoubtedly owes much to his generation’s fascination with the work of J. M. W. Turner. But the artist also had a darker side. Many of his compositions have elegiac overtones, outlining solitary edifices or lonely travelers against the last light of the setting sun.

Over a career that spanned forty years, he searched far and wide for landscape and marine subjects. He roamed as far south as Mexico, as far north as Canada, as far west as the Grand Canyon, and as far east as Europe. His views in pastel of Orr's Island and Cliff Island off the coast of Maine, Oyster Bay, Cape Elizabeth, Gloucester and the Isle of Wight were featured in an exhibition at the Salmagundi Club in 1904. (5) A critic for American Art News on a visit to McCord's studio the following year praised the artist's views of Dordrecht and Plymouth Harbor while announcing that he was embarking on a ten-week sketching tour of Mexico. (6)

Most interesting in the context of a collection of Southern art are McCord's paintings, which resulted from his trips to Florida in the 1870s and 80s. Some of these he exhibited at the Brooklyn Art Association beginning in 1874. From the titles of these pictures as they appear in the Association's catalogues, it is possible to deduce that he was on the scenic St. John's River; that he visited the "antique town" (7) of St. Augustine, and that he roamed in the vicinity of the Oklawaha River in the central part of the state. Many of these epitomize the "landscape of longing", which drew artist and tourist alike to Florida and other Southern points one hundred years ago. He lived for three years in Venice and later in Paris.

In 1880, he was elected an Associate of the National Academy and had many exhibitions throughout the country.