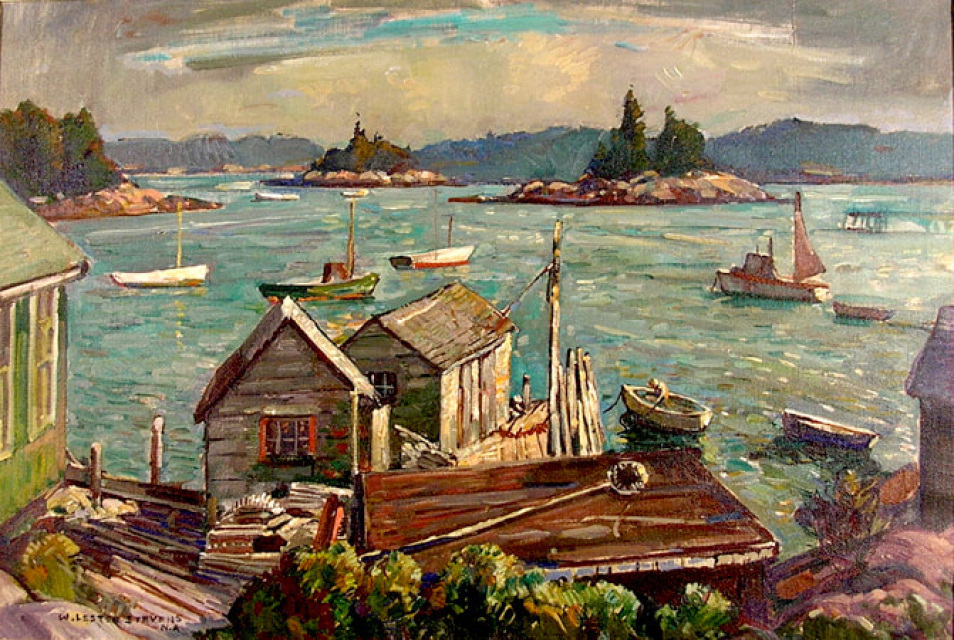 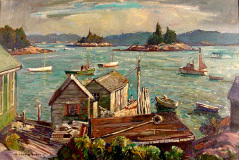 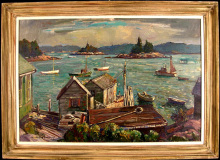 Born in Rockport, Massachusetts, impressionist painter William Stevens lived and worked in the area for many years. In the later part of his life, he moved to Conway, Massachusetts.

He received his initial art training from Parker Perkins, a local marine painter who charged him fifty cents an hour., and then he attended the Boston Museum School as a student of Edmund Tarbell, Frank Benson, Philip Hale and William Paxton. Although influenced by Tarbell, Stevens' wide range of brushstrokes and impressionist style prevented him from being classified as a "Tarbellist," as many of Tarbell's followers were labeled.

He taught at Princeton and Boston Universities, and by 1964 had won more awards than any other living artist. Stevens joined the Army in 1917 and was sent to Europe where he continued to paint and sketch. Upon his return to the United States, he was pleased to discover that Rockport had become a popular haven for artists. Though he was the only native son among them, such well-known painters as Frank Duveneck, Childe Hassam, Leon Kroll and Jonas Lie also recorded the scenery of Rockport, Cape Ann and Gloucester.

In 1921, together with fifty other artists, Stevens founded the Rockport Art Association, primarily to plan exhibitions of the work of outstanding area artists. Throughout the course of his long career, Stevens taught, first in Rockport, then at Boston University (1925-1926) and Princeton (1927-1929). He later gave lessons and held one-man shows in Charlotte and Asheville, North Carolina, where his work was well-received. Southerners particularly enjoyed his views of famous Southern gardens and cities.In 1943 he was elected by his peers to the National Academy of Design. Shortly there after he purchased a summer home on Vinalhaven, Maine , where he spent many summers. He taught his students "Don't paint to sell. Paint because you can't help it."

Though the Depression years were difficult for both the artist and his family, the 1930s did bring Stevens some measure of commercial and personal success. He did a number of covers for "The American Legion Magazine" and won prizes in New Haven, Springfield and Rockport. In 1934, he abandoned Rockport to the growing tourist population and moved to Springfield, and then to Conway, Massachusetts, where he remodeled an old farmhouse and constructed a studio which looked north towards Mount Monadnock. Except for summer trips made in the 1960s to Lubec, Maine, Campobello Island and Grand Manan Island, Stevens lived and painted in Conway for the rest of his life.

Primarily an oil painter, Stevens also used watercolor and acrylics. Although he was proficient in all three, oils allowed him greater versatility; more significantly, Stevens simply liked oils better. A superb craftsman, Stevens painted rapidly and with assurance, but always took time to find the best vantage point. He understood the importance of placing himself where he could create the best composition and "took the liberty of moving objects so that the composition would meet his desires." (Greenfield, p. 13).

Later in his life, Stevens also organized the Conway Festival of the Hills and the Berkshire Arts Festival. Except for summer trips made in the 1960s to Lubec, Maine, Campobello Island and Grand Manan Island, Stevens lived and painted in Conway for the rest of his life.

Stevens was a member of the Boston School, traditionalists and impressionists, opposed to abstraction in art. The subject matter was usually landscape, views of everyday life, and portraits. Stevens continued to create views of New England until almost the final day of his life, June 10, 1969.