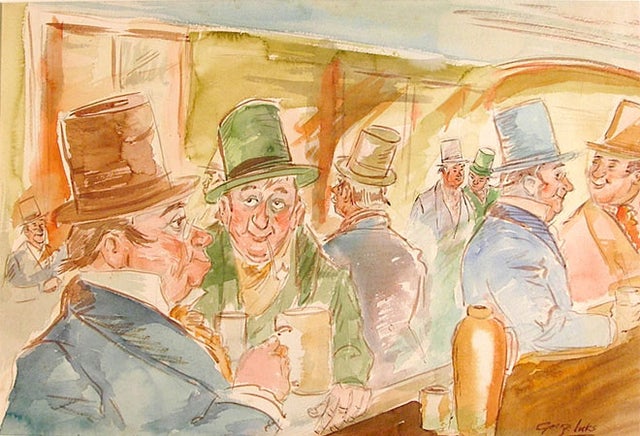 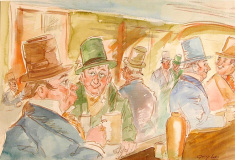 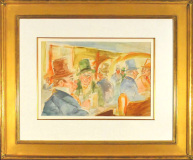 Born in Williamsport, Pa., in 1866, Luks toured as a youngster with his brother William in a minstrel act called "Buzzey and Anstock," and then studied at the Pennsylvania Academy of the Arts and the Kunstacademie in Dusseldorf and traveled to Europe where he came to admire Frans Hals.

Luks became an illustrator for the Philadelphia Press where he met John Sloan, William Glackens and Everett Shinn and they would meet at the studio of Robert Henri, an artist who emphasized the depiction of ordinary life, shunning genteel subjects and painting quickly. The group became known as the "Philadelphia Five," although they all individually migrated to New York where Luks became an illustrator for the New York World and then The Verdict. Luks for a while shared an apartment with Glackens.

In 1908, the five artists exhibited together at Macbeth's Gallery along with Maurice Prendergast, Ernest Lawson and Arthur B. Davies in a highly publicized attempt to challenge the dominance and jury system of the National Academy of Art. The artists were dubbed "The Eight" and Luks sold one of his works in the exhibition to Gertrude Vanderbilt Whitney, who would subsequently found the Whitney Museum of American Art.

He did not participate in the first exhibition of "The Independents" in 1910 as he was about to have his first one-man show at the Macbeth Gallery, but he did exhibit at the International Exhibition of Modern Art, the famous Armory Show of 1913. He subsequently joined the stable of the Kraushaar Gallery, where he exhibited regularly for several years before switching to the Rehn Gallery. He began to win some important prizes such as the William A. Clark Prize from the Corcoran Gallery in Washington and in 1920 joined Sloan as a teacher at the Art Students League in New York. In 1925, he opened his own school on East 22nd Street.

"Short and somewhat pudgy, with a stray lock of hair always falling over his forehead, Luks developed an ostentatious style of dress which favored flagrant prints, capes, large fedoras and a monocle attached to his vest with a ribbon," according to O'Toole.

He "prided himself in being the 'bad boy' of American art and would be pleased that this notion has survived as his reputation as a significant painter of the twentieth century continues to grow," she continued.

"A heavy drinker and engaged story-teller, Luks manufactured details of his own life to make himself more colorful. Most ingrained in his biography was his tall tale of having fought in the Mid-West as 'Chicago Whitey,' a middleweight boxing champion. No one ever checked his details. However, the mythology Luks created around himself masked an insecurity that reveals itself in the diversity of styles he sometimes employed as a painter. His mainstay was realism, but he experimented with impressionism and post-impressionism and was known to alter a canvas if it was criticized, sometimes ruining it entirely," O'Toole wrote.

At his best, which was not all the time, Luks was the best of the Ash-Can painters. His works abound with verve and his masterpieces are startling. He is most often liked to Hals, and the comparison is valid for his style proclaims a jolly, exuberant love and sympathy for people.

A heavy drinker, Luks had health problems and spent some time in a sanitarium. After a barroom brawl, he was found dead in the doorway of a speakeasy in 1933. O'Toole quotes his obituary of The New York Times as stating that his paintings "were invariably virile; his versatility was astonishing, and he painted as he lived - contemptuous of conventionalities, impatient with snobbishness and full of the joy of life that so many of his paintings reflected."

Unfortunately, Luks was not always at his best and many his works disappoint: they often seem like very rough sketches that are not all that well thought out or defined.

While the Ash-Can painters were focusing on contemporary Americans in contemporary settings, other Americans, such as Arthur Dove, Georgia O'Keefe, Joseph Stella and Max Weber, were experimenting with new abstract styles. The modernists were more innovative, but the lusty heartiness of the Ash-Can painters has an undeniable strength and was in its own way as revolutionary. They had a modern outlook that scoffed at traditional virtues. There is nothing academic about their work, nothing overly studied and organized and refined, just a vibrant immediacy. At the same time, there was little that was strident or political.

Luks is perhaps best known for "The Spielers," a painting in the collection of the Addison Gallery of Art in Andover, Mass., of two little girls dancing happily, and for his loving though melancholy portraits of old women. But his best work is quite different. One of the finest paintings is "North River," a grayish view of Manhattan from New Jersey painted about 1898 that is stunning and only priced at $85,000. Another knockout large painting is the "L-Street Brownies," one of many paintings he did in Boston where he had a major patron, Margarett Sargent.