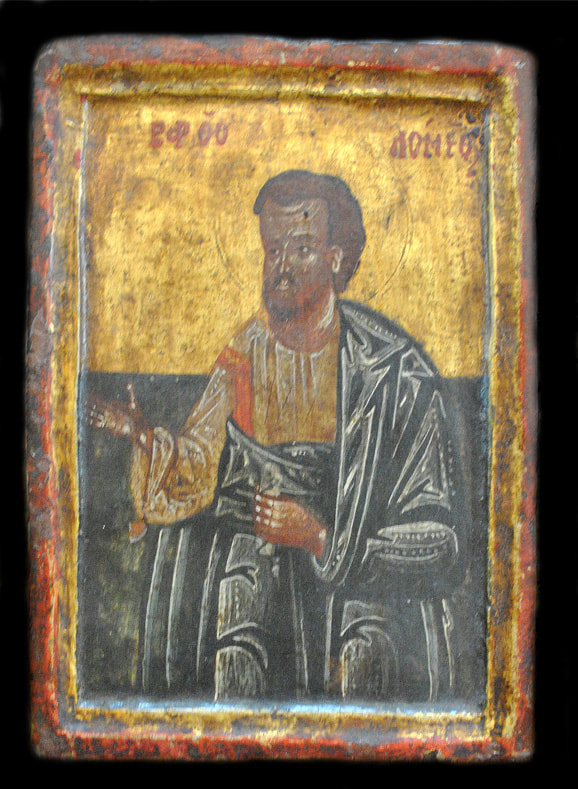 Kontakion in the Fourth Tone:

To the Church thou hast appeared as a great daystar;

with thy teachings as thy rays and beams of awesome miracles,

thou has enlightened those praising thee,

On the back of this icon is a note "St. Bartholomy from Meteora" however the spelling of this saint's name varies. Other variations include Barthelemy and Bartholomew.The literal meaning of the name in Hebrew is "son of the furrors; a plowman." Bartholomew is not his given name, but it is a name derived from his father's name. "Thomai" is his his father's name and "bar" means "son of." He is sometimes called Nathaniel and is known as one of the Twelve Apostles.

There is also no record of Bartholomew's association with Meteora in Greece. Most likely this icon came from Meteora or somewhere in the area, and the note does not directly relate to the saint's life.

He was born in Cana of Galilee. After the Descent of the Holy Spirit on the Day of Pentecost, much responsibility fell upon Bartholomew and another apostle, Philip, to preach the Gospel. They experienced much hardship, stoned and imprisoned during their journey. In the city of Hieropolis, they vanquished a giant viper through the power of their prayers, which the pagans worshiped as a god. Their teachings were confirmed through many miracles.

Bartholomew went to India and translated the Gospel of Matthew into their language. He also traveled to the country of Greater Armenia and healed the daughter of King Polymios. Afterward, Polymios and his family accepted Baptism and people all over their country followed their example. Then Bartholomew was seized by the king's brother Astiagus, who crucified him upside down. However he did not denounce his faith. In the end he endured great torture and was beheaded.