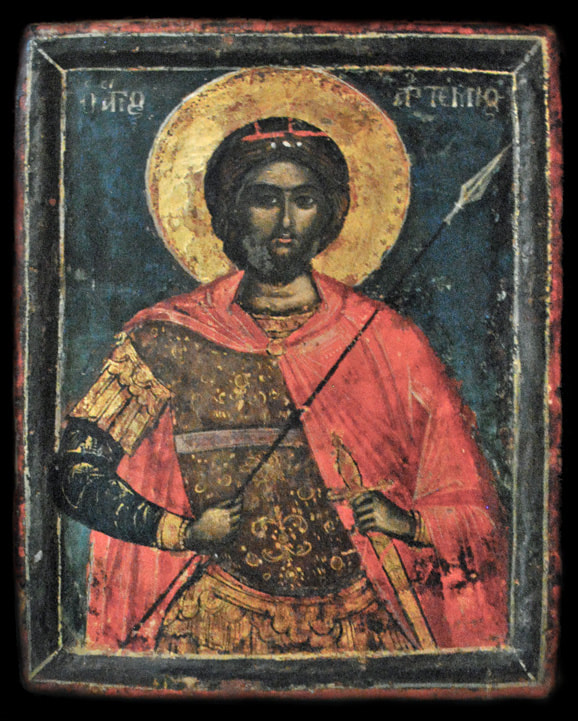 You endured beheading as your supreme boast.

On the twentieth astute Artemios was beheaded."

Martyr Artemios (or Artemius) was from a noble family and held in high regards by Emperor Constantine the Great. He was promoted to the rank of Patrician and appointed him as the Military Govenor of Alexandria and all of Egypt in 330. A.D.. Artemios spread strong messages of faith and salvation. After the emperor's death, his son inherited the East and gave Artemios the task of retrieving the relics of the holy Apostle Andrew from Patras. With his success, the emperor awarded him by naming him the ruler of all of Egypt.

Following the rule of Constantinus, Julian the Apostate took the throne. He had a strong desire to restore paganism and sentenced hundreds of Christians to death. Artemios publicly denounced Julian, and was then subjected to terrible tortures, then imprisoned.

Artemios prayed while in captivity and in one instance Christ appeared before him and said, "Take courage, Artemius! I am with you and will preserve you from every hurt which is inflicted upon you, and I already have prepared your crown of glory. Since you have confessed Me bofore the people on earth, so shall I confess you before My Heavenly Father. Therefore, take courage and rejoice, you shall be with Me in My Kingdom."

Artemios further antagonized Julian further and refused to honor the pagan gods. In the end, the great martyr was beheaded. Before his death, he prophesized Julian's impending death. This prophecy came true. Julian left for war with the Persians, and on his journey encountered an elderly man who agreed to guide his army. The old man decieved him and led the army into the Karmanite wilderness with no access to food an water. With the army fatigued from hunger and thirst, they encountered Persian forces. During the battle Julian, who wore no armor, was mortally wounded by an unseen hand and weapon. Who killed Julian is one of history's great mysteries.

In the 7th century, an unknown author compiled miracles of Saint Artemios. He is invoked to work his miracles by those suffering from hernias.

Salah. (2013, June 26) "'You have won, Galilean' - the Death of Julian the Apostate." Historium. https://historum.com/threads/you-have-won-galilean-the-death-of-julian-the-apostate.58636/