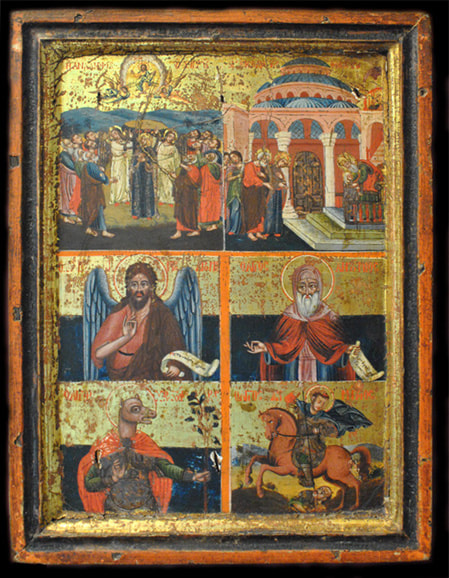 (translation: The Ascension of The Lord)

The Ascension of The Lord is recorded in the Gospels of Mark and Luke and in the Book of Acts. It depicts Christ rising to heaven in a circle of light, or in this instance a ring of clouds, supported by two angels. The Mother of God is seen in the center of the crowd, with two angels in white robes gesturing upwards. His disciples stand in a ring around the Mother of God and the two angels, looking up in wonder. The "Ascension" is a major moveable feast, meaning it is a religious holiday that falls on different dates in different years. It moves in response to the date of Easter.

Top Right: VVEDENIE VO KHRAM (translation: The Entrance of the Mother of God into the Temple)

This image is derived from the Protoevangelion of James. It depicts the presentation of Mary, three-years-old at the time, by her parents Joakhim and Anna to the Temple priest Zakharias (father of John the Forerunner). Mary often holds a candle, although she doesn't in this depiction. It is an element said to be a "late borrowing from the Western celebration of Candlemas." This is one of twelve great festivals and is usually celebrated on November 21. (December 4, Western Calendar)

John the Forerunner, more commonly known as John the Baptist, is a popular figure and has a privileged position in the Deesis tier of the iconostasis (a wall of icons and religious paintings in a specific arrangement, separating the nave from sanctuary of the church), sitting next to Christ and his mother. He is the last, and greatest, of the prophets in the Old Testament. John the Forerunner was a hermit and preached in the southern desert of Judea near the Jordan River where he performed baptisms.

He is commonly depicted wrapped in a tunic made of camel hair, although much of the iconography depicting him varies widely. He is often also seen with his severed head on a platter, after King Hrod killed him to please Salome, his brother's wife. John the Baptist reproached her for adultery. Some other variations include his depiction as the Lamb of God next to Christ, in a chalice, or as an Angle of the Desert. He is known as the messenger of the Lord based on the prophecy of Malachi. His head was dicovered three times, which lead to the iconography of "the Finding of the Head of John the Baptist." He holds a scroll which inscribes the words uttered by John himself at the Jordan river: "Behold the Lamb of God, who takes away the sin of the world."

Anthony the Great was born in 251 in Koma-- Memphis, Egypt in modern times. He was orphaned at the age of 18 and for the next twenty years lived a life in hermitage. He suffered the famous temptations near the ancient tomb where he lived. The other hermits he lived with considered him their leader, but he never acted like a leader or ruler. He taught by example as a simple abba, a man of God. The Sayings (Apophtegamata) of the Desert were born from his teachings. Anthony left isolation twice, once to help the condemned prisoners of Alexandria during the persecutions of 311, and second to fight the Arian heresy. He died at the age of 105. The semi-anchoritic style of living (anchoritic from Ancient Greek meaning "one who has retired from the world" for religious reasons) was further developed by Pachomius and later in Greek and Russian monasteries. Saint Athanasius, patriarch of Alexandria, wrote a Life of Anthony.

Anthony is commonly depicted in iconography wearing a dark red mantle with darker sleeves, and a light-colored hood which falls onto his shoulder "in a geometrical composition of drapery." He has a long, gray beard tucked into his hood. He also holds a scroll that alludes to the famous temptations. It reads, "I saw the devil's traps laid out on the ground."

Saint Christopher is depicted most often in iconography with the head of a dog, a mythical phenomenon known as cynocephaly. This depiction of the saint started after the Byzantine period, around the late 17th or early 18th century.

Saint Christopher was captured during combat with tribes in Cyrenaica of Egypt. He belonged to the tribe Marmaritae, in an area known as the land of cannibals; and the tribe members described "as being of enormous size and cynocephalos, or dog-headed." However, the translation of the word for "dog-headed" was slightly altered. The word was translated to a more literal form, but its original meaning was "dog-like" (canineus). In the Greco-Roman world, it was common to describe those living on the edge of their world and beyond as inhabitants of strange lands, cannibals, and dog-headed peoples. So with the description of "dog-headed," people of the Greco-Roman world were describing him as being on the edge of their civilized world. The cultural metaphor was misinterpreted in a literal fashion by later generations of "uneducated painters." There were some example prior to this of people depicted figures with dog heads, but saints were never depicted in iconography this way.

The saint is described as wild and fearsome. In the 12th century his was depicted as young and fearsome, and dressed like a soldier. Later, he was depicted with a cross of a martyr or with Christ on his shoulder. Toward the end of the 15th century, a beard is added. During Medieval times, writers took the more literal interpretation of Saint Christopher with the dog-head. A bishop and poet, Walter of Speyer (967-1027), portrayed Saint Christopher in his work as a "giant of cynocephalic species in the land of the Chananeans (the "canines" of Canaan in the New Testament) who ate human flesh and barked." The saint changed his ways when he met the Christ child at a river and received baptism. He was rewarded with a human appearance and devoted his life to serving God. He became one of the soldier-saints alongside saints including Saint Demetrius (see Bottom Right description) and Saint George.

Sanidopoulos, J. "The Depiction of Saint Christopher with the Head of a Dog." (2018, May 9) Mystagogy Resource Center. https://www.johnsanidopoulos.com/2018/05/

In the last register, Demetrius is depicted on the back of a horse, spearing the "king of the pagans," similar to the depiction of Saint George lancing a dragon (a symbol of evil). The pagan king represents the defeat and humiliation of the pagan world. The flowing cape emphasizes Demetrius's dynamism as he defeats the king. Depictions of him in iconography is of a holy warrior with a sword, lance, arrows, and sometimes a shield bearing a cross. In some depictions. his lance ends in a three-armed Orthodox cross.

Demetrius of Thessaloniki was martyred in 306 during the persecutions by Emperor Maximian. His relics were transferred to his basilica in Thessaloniki, Greece which became the destination for pilgrims and processions during the Middle Ages. In the mosaics, Demetrius was portrayed in a deacon's chlamys (a short cloak worn by men in ancient Greece) with red hair. He defended the city of Thessaloniki and his fame as a warrior saint is rivaled only by Saint George. Crusaders chose Demetrius as their patron saint, and took some of his relics back to France. There is a very active cult in Greece and Russia for the saint. In Russia a cathedral was built in his honor in Vladimir. An icon said to be painted on a piece of the saint's coffin was brought from Vladimir in 1380 to Moscow just before the battle of Kulikovo.