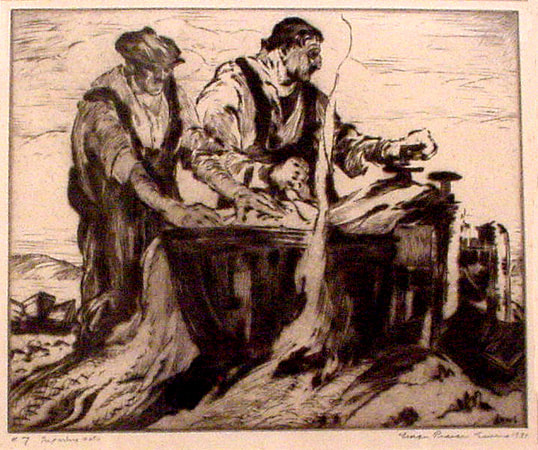 From St. Louis, Missouri, where Ennis studied at the Art School of Washington University, the artist went to New York to benefit from William Merritt Chase's instruction. He exhibited fifty-eight works (mostly watercolors) at the Art Institute of Chicago between 1920 and 1935. During the same period (1919-32) he exhibited at the National Academy of Design and at the Pennsylvania Academy between 1921 and 1936. Besides pastel, drawing and watercolor, Ennis executed stained glass windows, for example those at the Chapel of the U.S. Military Academy at West Point and at the New York Athletic Club. In New York Ennis opened his own school of painting and led a summer school at Eastport, Maine. He was fond of maritime subject matter and themes of fishermen at work. Ennis was a member of several artists' social organizations and he served as president of the American Water Color Society (1930-36). Ennis wrote the column on watercolor painting for the Encyclopedia Britannica. A car crash ended Ennis's life at the young age of fifty-two. A number of his important works, including his largest portrait, are in the permanent collection of The Peavey Memorial Library, Eastport, Maine.