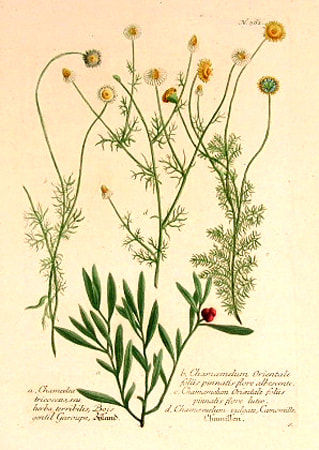 A comprehensive and beautiful record of known 18th-century flowers, fruits, and vegetables. Financed by Weimann, director of the oldest pharmacy in Regensburg, who commissioned amongst other artists the now celebrated Georg Ehret. It was his first major commission, but he was not credited, and only received half of his promised wages, on the grounds that he had only supplied about half of the 1,000 that Weinman was expecting of him. However, even at this early stage in his career, Ehret's style is easily identified, particularly in various aloes and cacti growing in distinctive pots and urns that is a feature of Ehret's work for his own "Plantae et papiliones rariores" (1748-1759). The "Phytanthoza ..." was a very important influential book. Filippo Arena borrowed heavily from it for his "La Natura, e coltura de' fiori" (1767-1768), and the dutch edition was imported to Japan where it "gave rise to a major change in illustrated botanical literature... and led to the productions from 1830 onwards of the illustrated herbal "Honzo Zufu..." by Iwasaki Kanen in ninety-six volumes" (Blunt pages 155-156). Dunthorne 327; Great Flower Books page 80; Cleveland/Johnston 388; Nissen BBI 2126; Pritzel 10140; Stafleu & Cowan TL2 17.050. Catalogued by Kate Hunter.