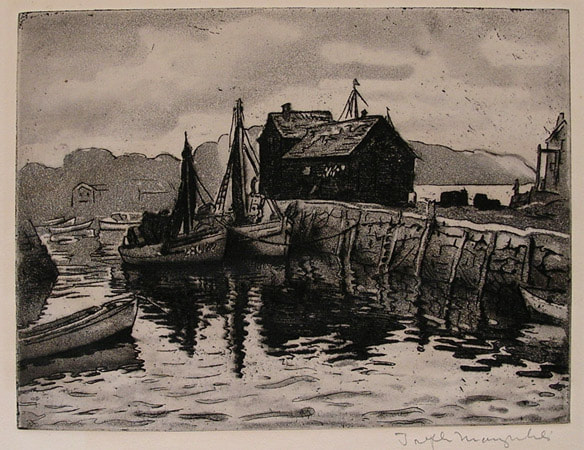 Joseph Margulies was born in Vienna, Austria in 1896. He immigrated to the United States at an early age. Margulies studied at the Art Students League of New York with the printmaker Joseph Pennell (1857-1926), from 1922 to 1925. Margulies then continued his studies at the National Academy of Design, Cooper Union in New York City, as well as the Art Students League in this countryand at the École des Beaux-Arts in Paris. He also apprenticed with Maynard Waltner in Vienna.

While he received many commissions for his acclaimed portraits, he still found time to paint appealing scenes of Central Park, Riverside Drive and other enchanting landmarks of New York City, the cultural mecca of the world and the city where he lived.

But then, summers beckoned him to Cape Ann where he was drawn to the Rockport Art Association, an area much beloved by many artists. Margulies maintained a summer studio in Gloucester and contributed to a remarkable chapter in the history of American art which embraced that circle of artist luminaries, Leon Kroll, John Sloan Edward Hopper, and Hayley Lever, all who shared in that haven of beauty where talent abounded. Like Hopper, Margulies, too, was inspired by the stark drama of the harbor.