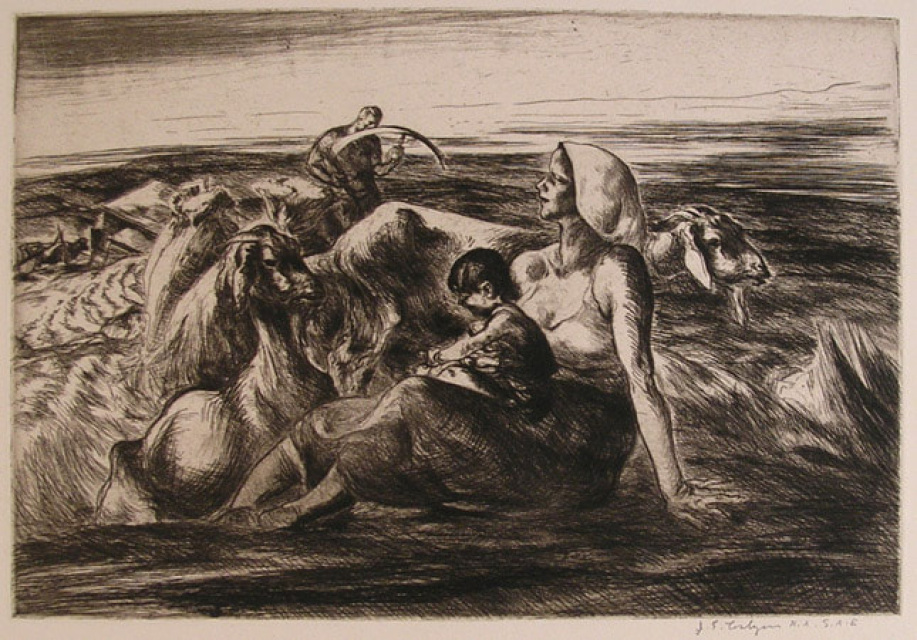 John Costigan was born of Irish-American parents in Providence, Rhode Island, February 29, 1888. He was a cousin of the noted American showman, George M. Cohan, whose parents brought the young Costigan to New York City and were instrumental in starting him on a career in the visual arts.

At the H. C. Miner Lithographing Company, Costigan worked his way up from his entry job as a pressroom helper, through various apprenticeships, to the position of sketch artist. In the latter capacity he was an uncredited designer of posters for the Ziegfeld Follies and for numerous silent films. Meanwhile, he had supplemented his very meager formal studies in the fine arts with a self-teaching discipline that led to his first professional recognition in 1920 with the receipt of prizes for an oil painting and watercolor in separate New York exhibitions.

John Costigan’s first national recognition came in 1922 with his winning of the coveted Peterson Purchase prize of the Art Institute of Chicago for an oil, “Sheep at the Brook.” It marked the start of an unbroken winning streak that would gain him at least one important prize per year for the remainder of the decade. The nation’s art journalists and critics began to take notice, making him the recurring subject of newspaper features and magazine articles.Costigan had his first one-man show of paintings at the Rehn Gallery on New York’s 5th Avenue in November, 1924, to be followed less than three years later by another at the Art Institute of Chicago.

In addition, Costigan’s work has been—and continues to be—included, side-by-side with that of some of America’s most high-profile artists, in museum and gallery exhibitions throughout the country. His renown had peaked in the early 1930s, by which time his work had been honored with nearly every major award then being bestowed in the fine arts and had been acquired for the permanent collections of several prestigious American museums, including New York’s Metropolitan.